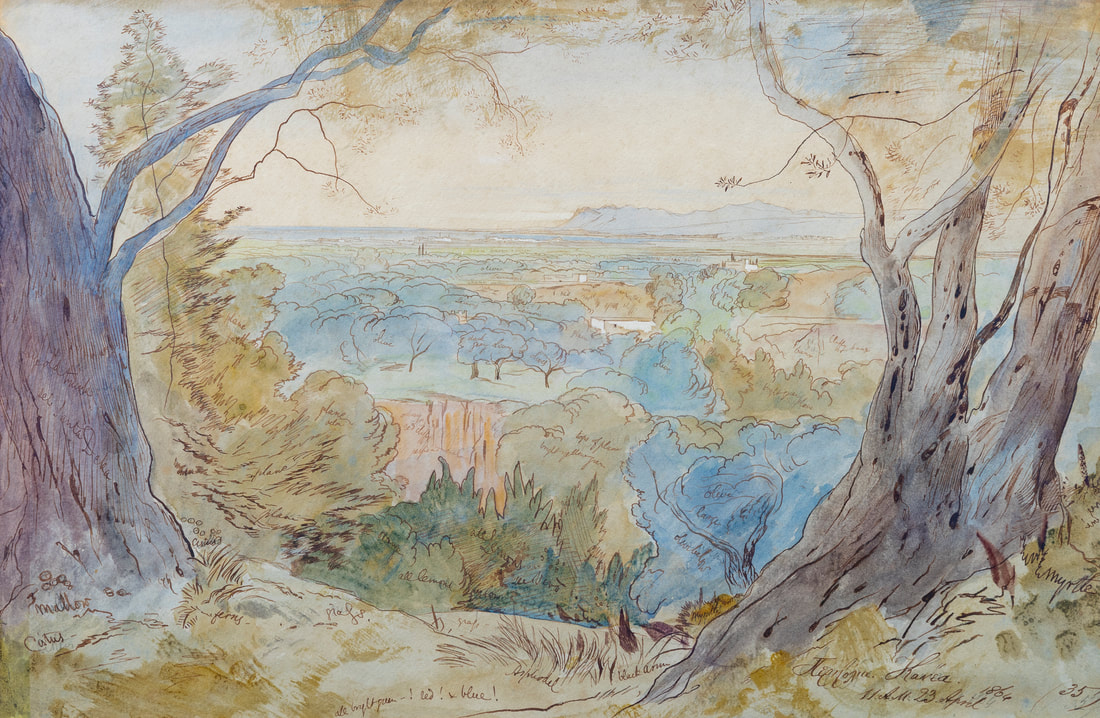 Perivolia, Kanea - 23 April 1864
During his seven week stay in Crete in 1864 Edward Lear made almost 200 numbered topographical drawings (such as the one above in a private collection) and a large number of other sketches.   On the following pages, you can find more about these drawings, their locations and what has happened to them since Lear's death in 1888.

The Cretan Drawings page lists all the known Cretan works, and subdivides these between the numbered drawings, unnumbered drawings and watercolours.   There is also a section on the most significant auction sale of Lear's Cretan works which took place in 1955.  It has (December 2018) been possible to verify the majority of all his works from a list drawn up by his executor, Franklin Lushington, and left by Lear on his death.  The listing has recently been discovered at the Yale Center for British Art.

The Map of Lear's Travels in Crete page shows where and when Lear travelled in Crete, and an accompanying table matches drawing numbers to dates and places.

The Pictures by Lear page has some illustrations of Lear's works in Crete.

Links give the website details for institutions holding Cretan Lears, and several other useful contacts.

Lear wrote a journal whilst in Crete.   This is an invaluable complement to his drawings.  It was published in 1984 as Edward Lear - the Cretan Journal by Denise Harvey (Publisher), 340 05 Limni, Evia, Greece.  The journal was transcribed from the original by Rowena Fowler, who writes an insightful Introduction and gives comprehensive notes.  Second edition 1985.  A third paperback edition with new appendices on the drawings was published in 2012.

Stephen Duckworth gave a talk at the Heraklion Historical Museum in May 2014 to celebrate the 150th anniversary of Lear's travels in Crete.  The talk is available here in English and in Greek.  He has also written about Edward Lear's Cretan Drawings and the story of their dispersal after his death in New Griffon 12, the Gennadius Library publication.